With the Concept GLB at Auto Shanghai 2019, Mercedes-Benz shows what SUV ideas on the company's compact car platform might also be realised alongside the GLA as a sporty all-rounder. While the latter promises progressive driving enjoyment with its coupé-like lines, the Concept GLB places the emphasis on spaciousness and robustness. The concept car has space for up to seven occupants thanks to its long wheelbase (2829 millimetres). A number of sturdy features signal that the Concept GLB feels right at home on rough farm tracks. 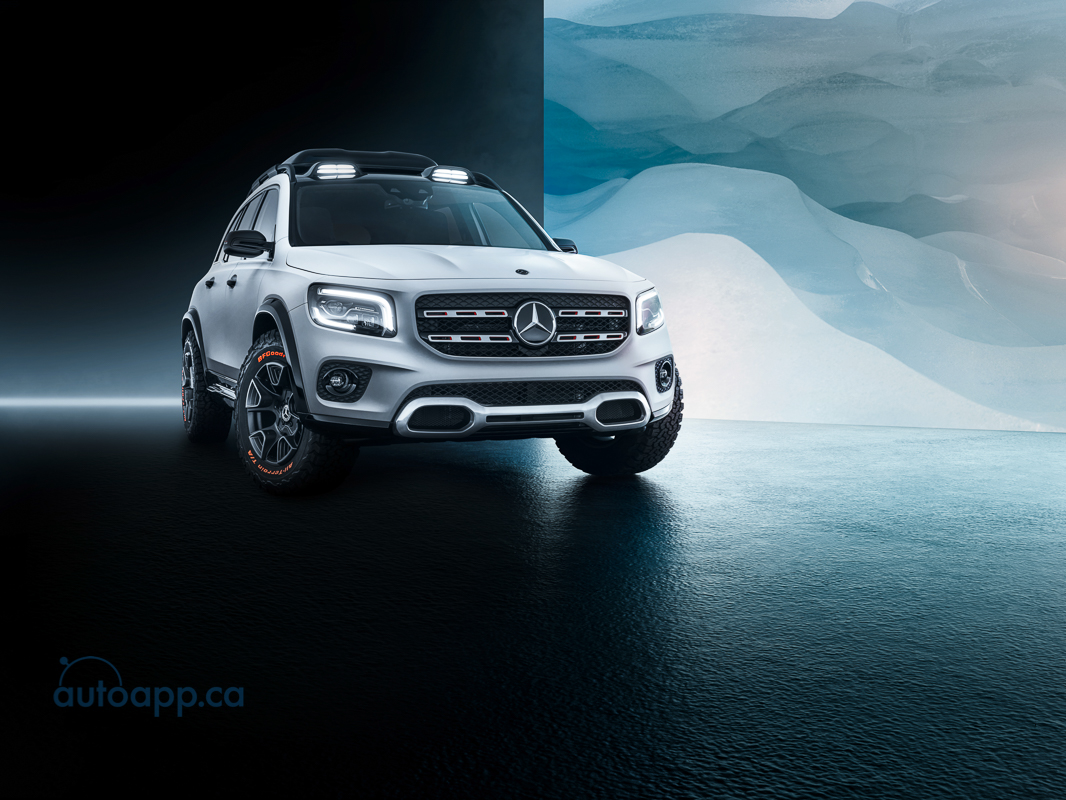 The Mercedes-Benz Concept GLB has a distinctive presence in the world of compact SUVs with its muscular proportions. The clear, surface-accentuated contours with reduced lines and precise joints convey effortless superiority and modernity. The upright front section with its striking MULTIBEAM LED headlamps is clear evidence of off-road genes, as are the short overhangs at the front and rear. The long wheelbase and the functional greenhouse are the decisive factors providing generous spaciousness for up to seven occupants.

The muscular and sensuously contoured vehicle shoulder dominates the side view, an effect reinforced by the rising waistline. The contiguous doors improve ease of access and keep the door apertures free of soiling. All-round protective claddings divide the overall proportions and emphasise the vehicle's off-road character.

The harmonious colour concept has exterior paintwork in designo cashmere white magno with high-gloss black mounted parts (e.g. the claddings or integrated roof box) as a contrast, plus discreet orange highlights in the radiator grille and as lettering on the outside mirror housings.

The chrome underguard at the front with integral air inlets in a stainless steel look emphasises the off-road qualities. The rear underguard echoes this theme, creating a balanced overall picture. 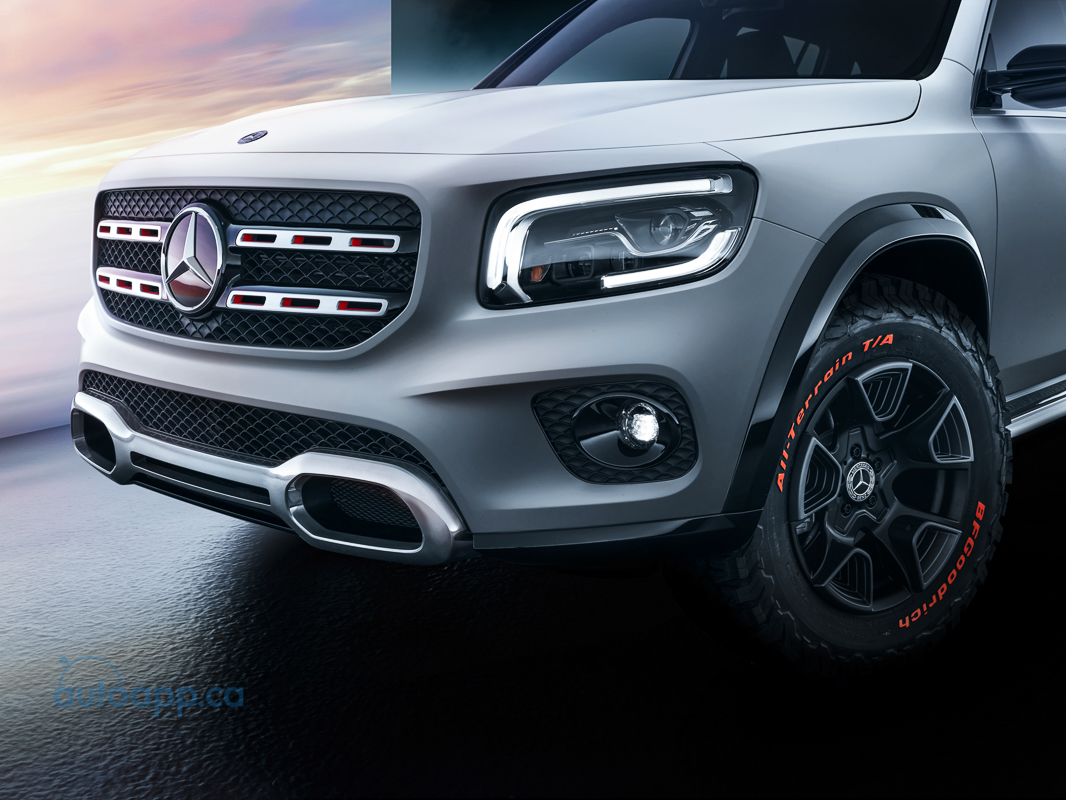 With a series of distinctive extra elements the concept vehicle exhibits a particularly robust character. At the front and rear, two shrouds emerge from the roof frame and accommodate LED spotlights acting as ambient lighting and orientation aids when driving off-road.

The black roof rails end in a curve at the front and rear. A roof box is mounted on the rear area. The rough-treaded off-road tyres are on robust 17-inch wheels in a bicolour design. 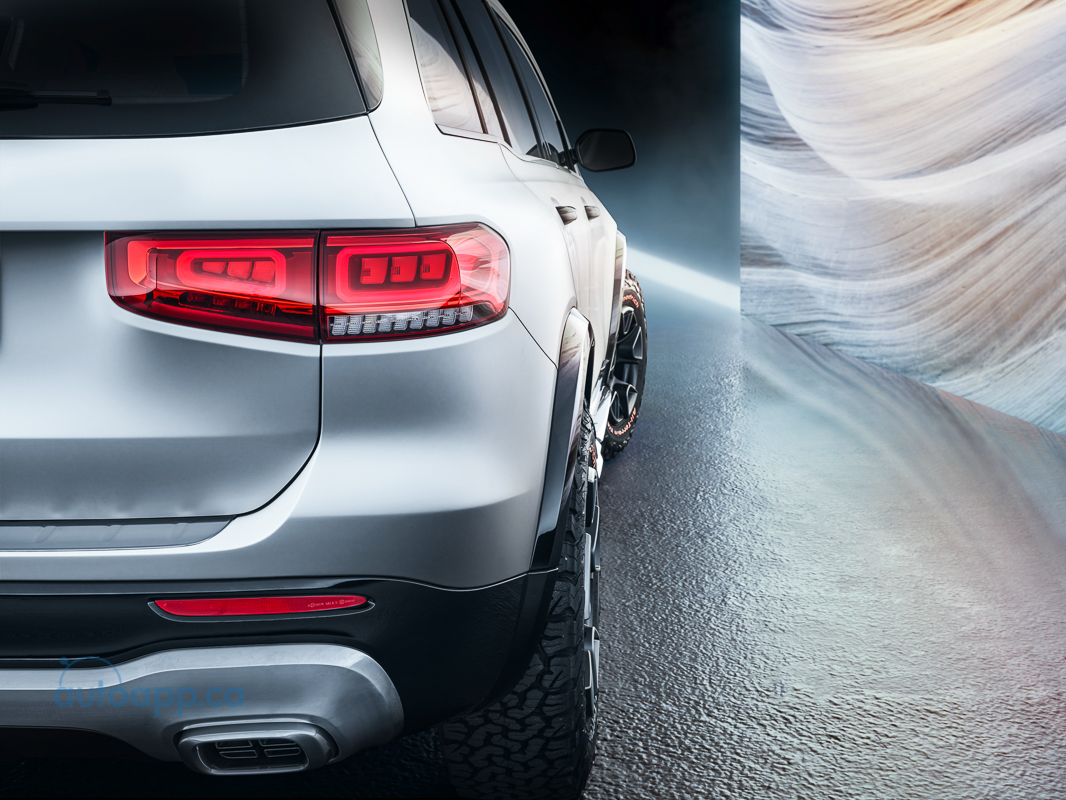 In design terms the interior of the Concept GLB reveals its membership of the new Mercedes-Benz compact car family, but as a showcar and SUV it has a special leather features and special trim elements. And for the first time in a compact model by Mercedes-Benz, a third seat row with two additional single seats that can be recessed flush into the load compartment floor to increase load capacity. These seats are far more than emergency seats, and offer comfortable seating for two medium-sized occupants. 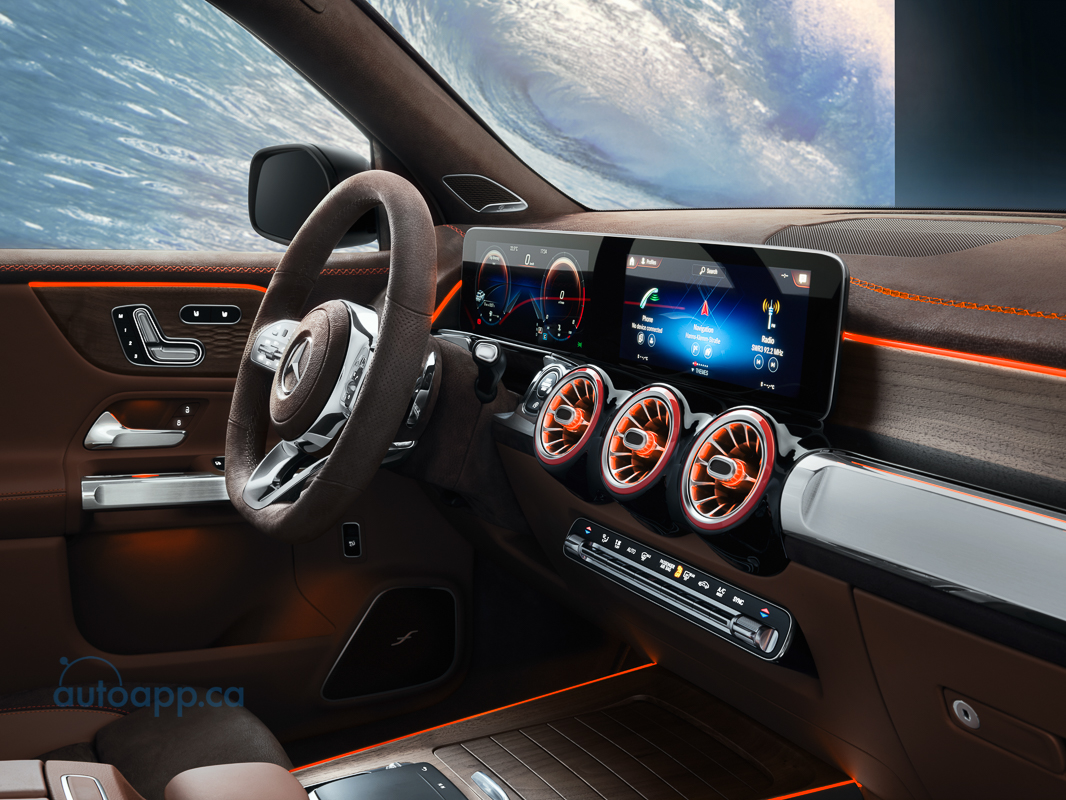 The backrest of the middle seat row is 40:20:40 split-folding, and can be folded down to create a level load surface. The seat surfaces have a 40:60 division. The second seat row is fore-and-aft adjustable by 140 mm – by 90 mm to the front to increase luggage space or legroom for occupants right in the rear, and by 50 mm to the rear if particularly generous legroom is required in a five-seat configuration. Eight-stage seat backrest inclination adjustment in the second seat row also facilitates adaptation according to the current space or comfort requirements. 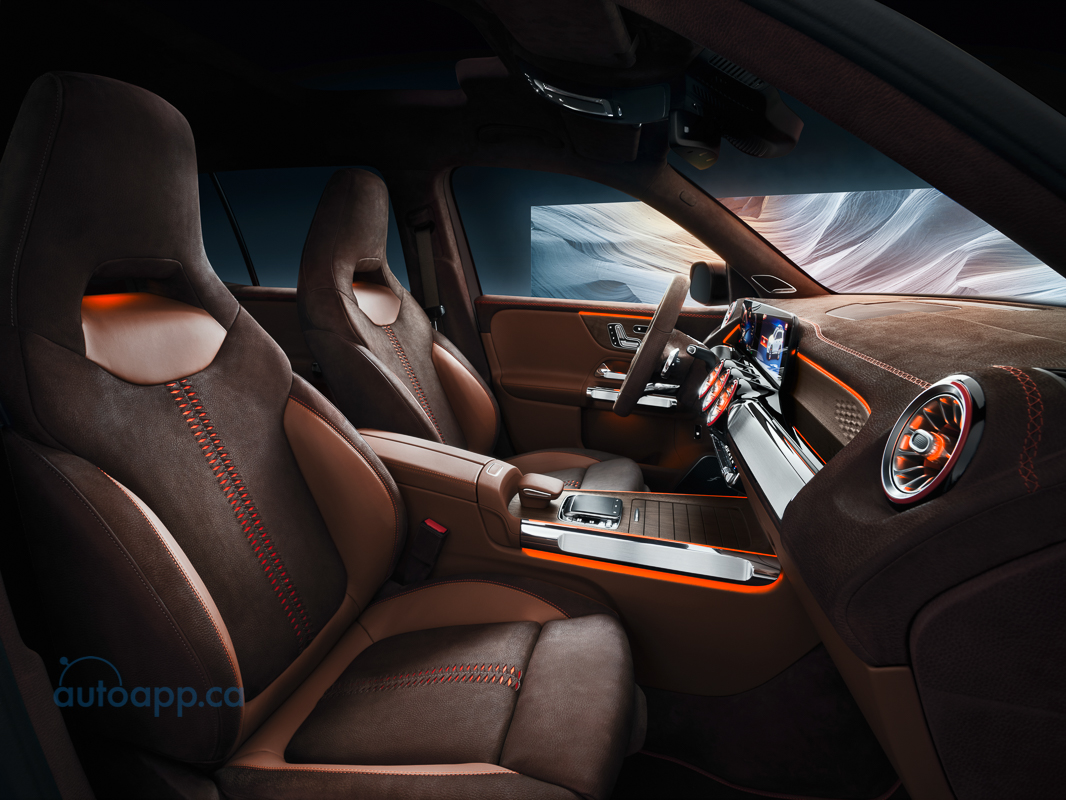 The seats, fittings and door panels are partially lined in nappa and nubuk leather, the predominant colour tone being "chestnut brown". Echoing the exterior highlights, there are orange trim strips and seams in just a few places. The centre sections of the front seats have two parallel rows of perforations in their woven nubuk leather covers, revealing the orange-coloured fabric sub-layer. These extend from the front edge of the seat cushion to the upper edge of the integrated head restraint.

The wood trim elements on the dashboard and centre console are of open-pored walnut. The walnut panels have a chiselled honeycomb pattern that fades out towards the edges. The pedals in the footwell feature decorative inserts in the same material within a high-gloss metal surround, with an identical honeycomb pattern. 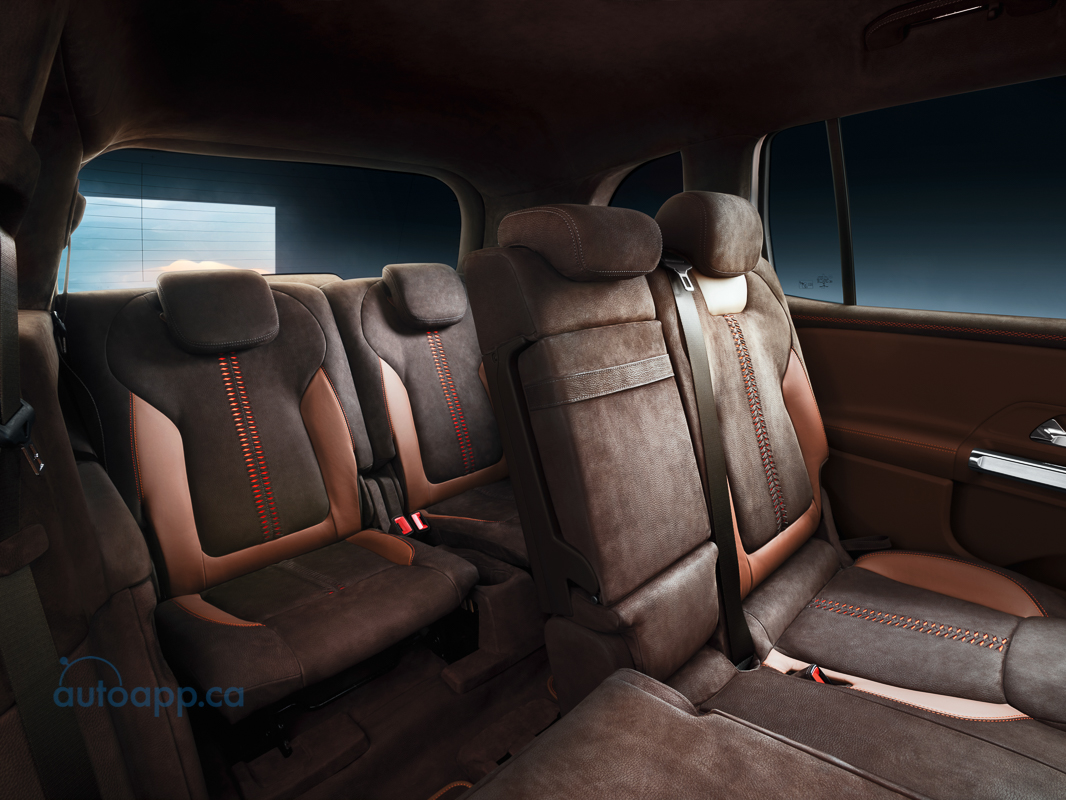 A look back at Shanghai 2013: world premiere of the Concept GLA

This is not the first time a compact SUV concept has celebrated its world premiere at the Auto Shanghai show: On 18 April 2013 the Mercedes-Benz Concept GLA drew public attention. As a sporty, coupé-like evolution of this vehicle class, the showcar pointed a new way in the compact SUV segment. It combined a sporty spirit with the all-round qualities of a robust recreational companion.